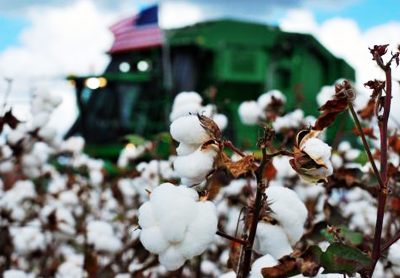 Have you ever thought about where the clothes you and your family wear come from, or the dressing you put on your salad, or the sheets you crawl under at night before you go to sleep? It comes from cotton! Cotton the most important and widely used fiber ever known to man. Cotton is used for thousands of things, including clothes, space suits for astronauts and ingredients in the food we eat

Cotton is a plant, it grows wild in many places on the earth, but it has been known about, cultivated and put to use by people of many lands for centuries.

Scientists and historians have found shreds of cloth or written reference to cotton dating back at least seven-thousand years. The oldest discovery was made in a Mexican cave, where scientists unearthed bits and pieces of cotton bolls and cloth.

Archaeologists have also found cloth fragments in the Indus Valley of India (Pakistan) dating about 3000 B.C. In 1500 B.C., cotton was referred to in a Hindu Rig-Veda hymn mentioning “threads in the loom.” It is generally believed that the first cultivation of cotton was in India, though it grew wild in several locations around the world. People living in Egypt's Nile Valley and across the world in Peru were also familiar with cotton.

Cotton was grown by American Indians in the early 1500's, documented from sightings by the Coronado expedition 1540-42. The Spaniards raised a cotton crop in Florida in 1556.

In England, in the early 1700's, during the height of the British Empire, it was against the law, to either import or manufacture cloth from cotton. These laws were enacted to protect the powerful English sheep and wool industry of that time. These restrictions also kept the cotton industry from expanding to the American Colonies. However, by the early 1600's, cotton had been introduced to North America and in 1607 the first seed was planted by colonists along the James River in Virginia.

The colonists had the ability to produce much cotton but were restricted by the mechanical know-how. It was Samuel Slater , an English mill worker, who changed this by migrating to America in 1790 and building the first American cotton mill from memory.

With the development of the cotton mill, Eli Whitney saw the need for a faster means of removing the lint (cotton fibers) from the seed. In 1793, he invented a machine known as the cotton gin . This invention revolutionized the way lint was separated from the seed. Up to that time, for centuries, the separation process had all been done by hand. With Whitney's gin, short for the word engine, lint volume was increased for each worker from 1 lb. To 50 lbs. per day.

Harvesting the cotton by hand was another limitation of productivity. An experienced laborer could pick approximately 450 pounds of seed cotton (cotton removed from the plant with seeds intact) by hand per day. A picking device was first patented in 1850 and a stripper (a machine that strips both open and unopened bolls and trash from the plant) in 1871.In the early 1930's, after years of development and change, the Rust Brothers of Mississippi used a one row mechanical cotton picker (a machine that used revolving spindles or barbed points to grab and pull the cotton from the open boll) of their design to pick approximately 8,000 pounds of seed cotton in one day. This was quite an improvement in cotton harvest efficiency.

There are 43 species of cotton. 37 are from the Old World(Africa, Asia and Australia) while six are from the New World (North America/ South America), Hawaii and the Galapagos Islands

Cotton can absorb upto 27 times its own weight in water

Denim was first made in the 16th Century at a place called Nimes in France.

Atleast 215 pairs of jeans can be made from one 227 kg bale of cotton.

Aside from fashion, cotton and its by products are also used in the production of bank notes, margarine, rubber and medical supplies.

Since early 1980s China has overtaken USA as the largest producer of world cotton.

India is now the second largest producer of cotton in the world behind China. USA is now at third position